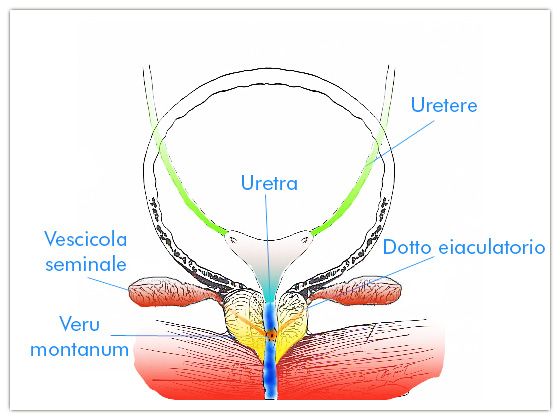 The prostate contains three large ducts, a small central duct known as the utriculus and as many small canals as there are acina.

The three major ducts are:

The utriculus is a small duct which joins the veru montanum between the two ejaculatory ducts. It is considered a pre-sex differentiation embryological remnant of what will become the uterus in females. After birth, in males the utriculus may atrophy and almost totally disappear or become a closed duct, dilate and form cysts ((utricular cysts) which may cause prostatitis-like symptoms if inflamed.

During ejaculation, the fluid produced by each acinus flows through the minor ducts (which also join the urethra at the veru montanum) to mix with the sperm from the seminal vesicles. This prostatic fluid is essential to ensure motility and vitality of spermatozoa and indeed, in the course of prostate inflammation, abnormalities in them may impair fertility.